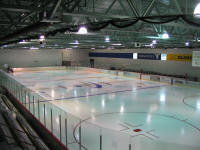 The ice surface is maintained at 18-21 degrees Fahrenheit. This is made possible by running one-inch glycol tubes through the concrete arena floor, spaced four inches on the center. The load is handled by a four-compressor freon chiller system. Each color in the ice, including the white, is hand-painted once annually. This is done with stencils and paintbrushes. All the colors you see are approximately 1.25 inches beneath the ice surface.

The Vernon Arena ice resurfacer is a Zamboni Electric Model 552. The Zamboni is powered by 40 battery cells tied in a series, equalling 84 volts on a full charge. This makes it possible to resurface 12 to 15 times on each charge. The ice is shaved with a 70-pound, 77-inch blade hidden under the conditioner.

There are approximately 125 gallons of 150-degree Fahrenheit water used during each resurface. Believe it or not, the two Zamboni batteries weigh 1,750 pounds each, which helps the Zamboni tip the scale at 11,800 pounds.